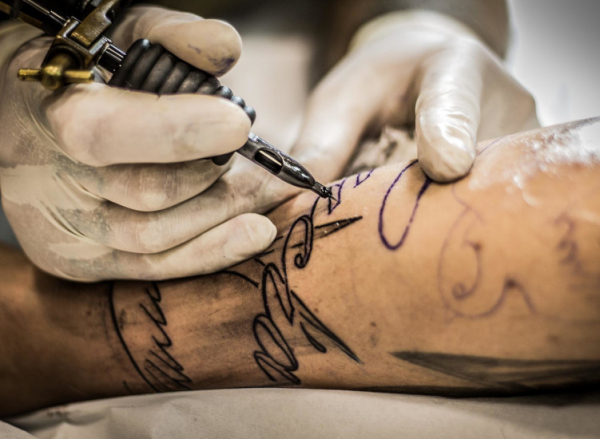 Over 3 million Poles have at least 1 tattoo, and 50% of them will want to have it removed one day. The laser or chemical method is selected depending on the type and color of the dye, as well as the depth of its location. Sometimes both methods can be used simultaneously to get the best possible effect.

The pigment used in the tattoo absorbs the laser beams, which is why it is destroyed. After the dye is broken down, it can be partially metabolized (by the immune system) or exfoliated (along with the scab formed after the treatment). The treatment is safe for the skin as the laser beam affects only the dark dye or pigment. During it, a slight burning sensation is felt.

The laser works well for removing professional and amateur tattoos, as well as for removing permanent makeup. The number of treatments depends on: the type of dye and color, pigmentation technique and the size of the tattoo.

The short duration of the Q-switch laser pulse (a few nanoseconds) allows to increase its power. As a result, the dye particles are broken down even better than in the case of lower-quality lasers.

The skin must not be tanned and irritated at least one month before the treatment. For 5-10 days, after treatment, the skin may be slightly red and irritated, so it should be lubricated intensively. To avoid scarring, do not scratch off the scabs. Sunbathing is also forbidden until the 6th week after the treatment.

Avoid UV radiation (use filters with a high SPF factor). For the first 2 days, after laser therapy, avoid soaking the treated area, and for a week, avoid color cosmetics, as well as excessive physical exertion. In turn, during 2-3 weeks you should not use the sauna or bathing areas.

Disadvantages of the laser method.

Laser methods that were used a few years ago often caused scars, but the Q-switch laser significantly reduces the risk of their formation. However, they often only lighten the dye without completely removing it. Therefore, laser removal (lightening) of a tattoo should be considered mainly by people who do not want to get rid of it completely, but want to lighten it in order to cover it with a new drawing.

Some colors (e.g. green and yellow) are not sensitive to laser light. That is why the tattoo often brightens, despite 6-8 treatments. The dyes also contain heavy metal salts. After they are broken by the laser beam, they remain in the lymph nodes or internal organs. It is difficult to say what impact this may have on our health in the future.

Due to the disadvantages of the laser method, Keramed from Wrocław also removes tattoos using the Skinial method. This clinic is one of three in Poland that performs treatments using this method. It is similar to making a tattoo, because a similar device terminated with a needle module opens the skin above the tattoo. Then a small amount of liquid is administered, which mainly contains lactic acid. It is a non-toxic substance that is part of our body.

When mixed with a dye, the immune system is activated, and food cells (macrophages) are activated. They absorb the dye and accumulate at the surface of the skin. A scab is formed a few hours after the treatment, which falls off after 3-4 weeks. The skin in this place is like a typical scab after the scab has fallen off, i.e. dark red and thin, but devoid of dye. It gradually fades over a period of months to regain its natural appearance.

“Of course, the chemical method is also not without its drawbacks, but the experience and the possibility of combining both methods allow us to obtain the best possible results. In Poland, clinics remove tattoos with one or the other method, while only Keramed offers both at the same time, ”says the drug. med. Grzegorz Markowicz from the office of aesthetic medicine and the Skinial method in Wrocław. The procedures are performed in a doctor's office, which meets the conditions of sterility and sanitary epidemiological conditions.

Patients often do not know exactly what both methods are based on, so they have a free consultation before starting treatment. During it, the type and quality of the tattoo is assessed, and then the planned treatment.

Currently, there is no method that can guarantee removal of a tattoo without leaving any trace on the skin. A very good result is the situation in which the skin looks healthy when viewed from 80-100 cm. However, it can always happen that it will be slightly discolored or thinner.

In order to shorten the treatment time and reduce the total cost of tattoo removal, it is worth using both methods.

Tweet
Published in Health
More in this category: Get up well rested and relaxed »
back to top